Tonight we dined at the Thirsty Marlin in Palm Harbor. It's one of our favorite places to eat around here. These pictures were actually taken a few weeks ago during a street festival called the Parrot Head Party which featured Jimmy Buffet style live music as well as arts and crafts. While we were waiting for our dinner, I had a meeting of the minds with the Thirsty Marlin's hammerhead shark. 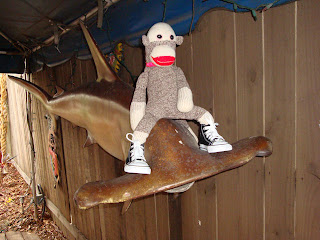 I think you can tell who dominated whom. I have that effect on my fellow creatures.

Oh boy! It was Gunther's turn to be the representative at the bank for Sock Monkey Friday last week. This was not his first rodeo. Gunther previously attended this weekly event shortly after his arrival from Texas. Due to popular demand, he's going back to please his fans. The customers call him the Big Monkey... hmph!

Gunther is making sure that Laura doesn't forget to take him. He's firmly attached to her purse, which she never leaves home without. 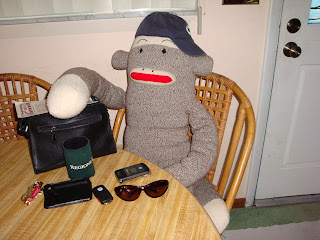 Beep beep! C'mon Laura, let's get a move on. We're going to be late to work! 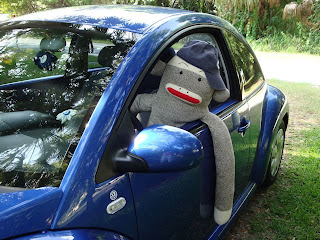 Gunther decided he will play bank teller today. He's open for business. Gunther will only be accepting banana deposits today. 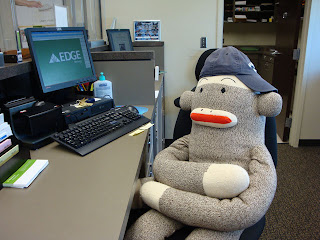 Uh oh! Gunther is not following procedure. There's a no hat, no sunglasses policy at the bank. Somehow sock monkeys are always able to bend the rules. 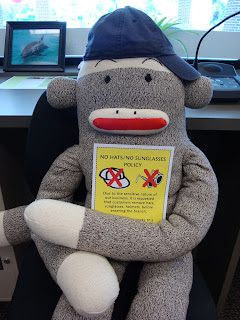 I would have liked to post a picture of two blonde females fighting for Gunther's attention. One of the females refused to be shown on the internet. The other did not want her crush on Gunther to be advertised beyond the walls of the bank. She has a thing for German men. For the sake of the blondes' privacy, no names are being mentioned.
Posted by Big Monkey at 4:18 PM 4 comments:

I've attached some photos of my new rapper look including lots of newly acquired bling. 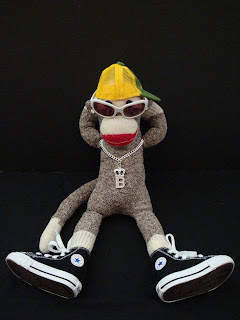 Here's a close up of my pendant - B with a crown on top. 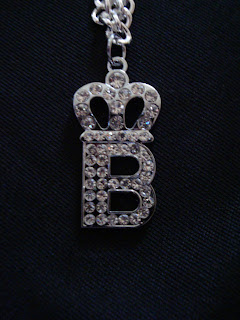 Take note of the diamond studs in my ears. 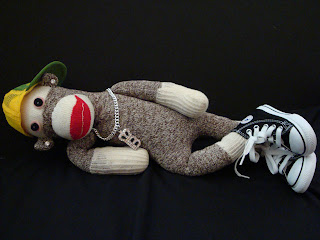 I'm feeling on top of the world right now. 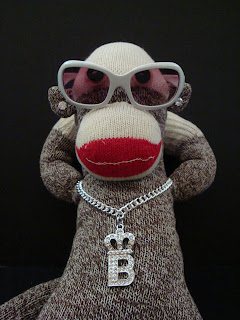 Here's another piece of bling - a dollar sign pendant. When my record gets released, I'll be earning lots of G's. 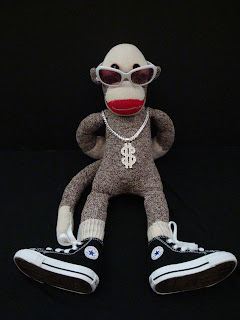 Now, here my rap... what you've all been waiting for.

My name is Big Monkey
And my heritage is hunky

I was born in Pennsylvania
Where the sammiches sustain ya

Pittsburgh Steelers, Nittany Lions
Are my teams, there's no denyin'

To Crystal Beach I relocated
Quite a stir my move created

Despite my alpha male position
Fame and fortune were my mission

Blog and Facebook popularity
Has brought my life new clarity

To reach my full potential
Sock charisma is essential

I exhibit sox appeal
Which the ladies say for real

If I'm crusin' on my hog
Or postin' on my blog

Reportin' weather to Jenn Hill
At NBC, it's such a thrill

I'm having fun every day
'Cause I do it my way

Those of you on Facebook know that I've written my first rap song. I plan to formally post my lyrics on this blog, but first I'm assembling some rapper gear and accessories. I think you will enjoy my big reveal, which is coming soon!

My rapper name is B-Monk and this is my homie K-Dawg a.k.a. Karl. We're chillaxing in this photo like buddies should. 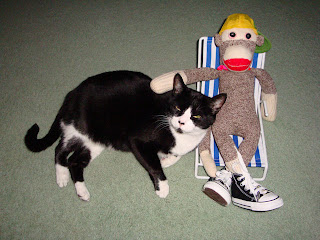 One of my specialties is chili. It's hearty, yet heart healthy and low fat as well. Although this isn't a Croation recipe, I am donning my traditional babushka while I prepare this meal.

The first step is to cook the meat which is 99% fat free ground turkey. Some ground turkey is quite fattening, so you need to read the labels before you purchase. 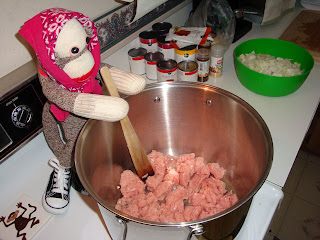 After the meat is cooked through, I add chopped onions and bell peppers. I use red, green and yellow to make it look colorful. To cook these faster, cover your pan and stir occasionally. 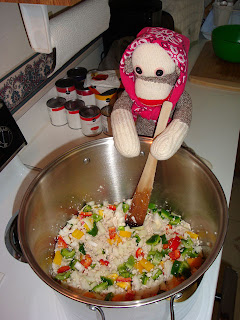 After the onions are translucent and the peppers are cooked, I add diced tomatoes, tomato sauce, and several types of beans (light red kidney, dark red kidney, black and pinto). I usually add the pinto beans a little further into the cooking process since they break down rather easily. 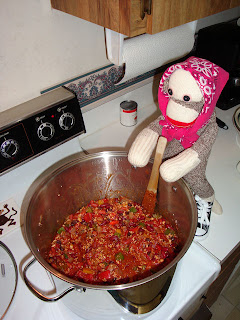 As you can see, lots of cans were used to make this meal. I do not throw these away. I rinse them out and recycle them. 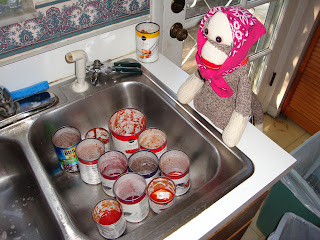 Posted by Big Monkey at 4:51 PM No comments:

These are the spices I use in my chili: chili spice packet plus additional chili powder, ground cumin, red pepper and garlic powder. I don't use specific measurements. Just add the seasonings to suit your own taste. 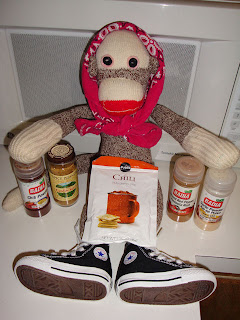 I love guacamole with my chili. It's quite simple to make. Just mash up an avocado and add some garlic powder. 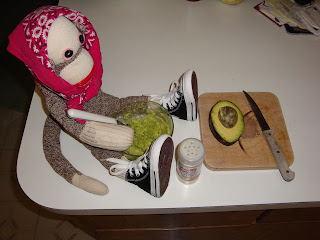 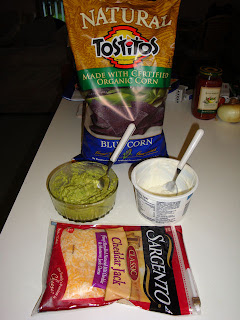 Here's the finished product! Oh, I can't wait to dig into this bowl. Yummo! 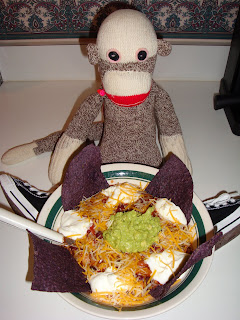 I apologize for the long delay since my last post. On the bright side, I have several new stories to share with you!

This is my new beach chair that I received just in time for the Memorial Day holiday. Here I am lounging with a chilled Corona. What a great way to relax and catch some rays! 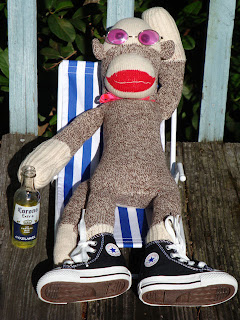 I'm also showing off my brand new Converse Chuck Taylor All Star high tops. I suppose he is a famous human athlete or something. Maybe someday I'll have my own endorsement deal for running shoes after my success in the monkathon during last summer's Olympics. They didn't call me the fastest pantyhose filled legs on the planet for nothing! 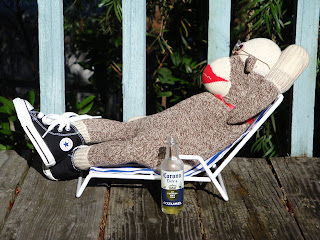 Posted by Big Monkey at 4:33 PM No comments: