I haven't been blogging much because our family suffered two excruciatingly painful losses in the past two months. On 11/11/10, Mark lost his 4+ year battle with brain and spine cancer. Although I always claimed to be his uncle, Mark insisted we were twin brothers since we shared the same birthday. I decided to post this picture of him from about a year ago at Christmastime. We had a contest to see who rocked the sock monkey hat the best, and Mark won hands down. He was an incredibly talented, funny and special human who I miss more than you know. 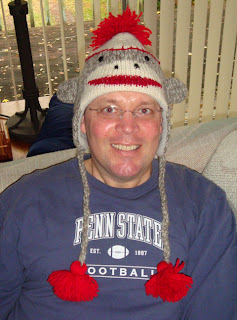 Thirteen days prior to losing Mark, his beloved cat Karl passed away. Karl battled bladder stones and kidney disease for over 5 years with spunk and defiance. He was very similar to his "father" in many ways. This was Karl during last year's Christmas celebration embracing his new sock brothers. I miss "the boy" and his unique cat personality. He was a treasured member of our family. 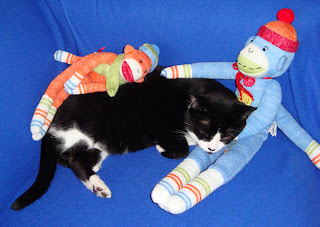 Stay strong B.M. We miss them too. Try and take time this Christmas to get out pictures and remember the Christmases past.

Hi B.M., may Santa fill your stocking with bananas this holiday season. We love you and Laura! Carson and Crew

Thank you Fred, Carson and Crew! I hope Santa Monk is good to you this year.